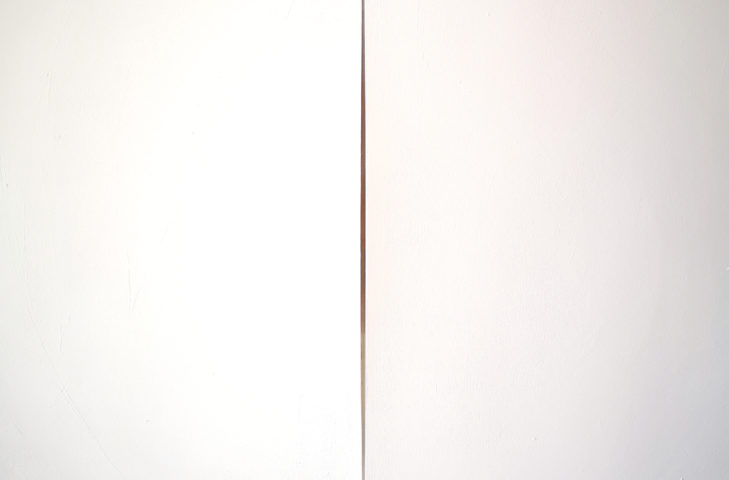 The question about space is, therefore, that of
the transcendental condition of man. This means at
the same time that space is not simply there,
independent of man. There is space only to the
extent that man is a spatial being, that creates
space, that “display” it around him.
Otto Friedrich Bollnow

To think of space as something that emanates from the body, as a sensory experience and, through an object, to influence in that experience. To take a small surface and move it slightly, distorting the normative space from a minimum action. Synthesize the abstraction of space in an elementary language, where objects are little more than a distortion of the wall. The distortion of a plane that should be straight.
The distortion of the experience of the body in the exhibition space.

Random surface displacement reflects on these questions from the specificity of matter and form, which are taken to their minimum expression. The subtle, the purity, the plane, the line, the search for
the elementary are constituted as a language to modify a physical space, and at the same time to influence the perception of that space.

The geometric synthesis is used to articulate a tautological language. In this, the word has no place since it is constituted as a phonetic and symbolic language, which is merely capable of interpreting that which
belongs to the sculptural language. Language opens up to a field of experiences that are generated between the collision of the viewer with an object that contains form, matter, presence and context.